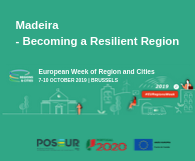 Madeira – Becoming a Resilient Region –  is the theme of the participation of POSEUR in the European Week of Regions, in Brussels, from 7th to 10th October.

You are invited! Come watch, admission is free.